Traveler or Tourist? (Probably Part 1 in a Series of Posts)

Something that came up in my recent workshop was the difference between a traveler and a tourist. We didn’t decide on any exact definitions, but we summarized that a tourist is just passing through and wanting the bare minimum taste of an area, while a traveler wants to be immersed in the culture. Basically: tourist = tapas; traveler = banquet-style feast.

As we talked about this, I thought to myself, “Well obviously I’m a traveler. I’ve lived in several different countries, I’ve traveled a lot and I don’t stick to large resorts or guided tours–I’m a traveler. Plain and simple.” Preparing to travel to Asia also made me feel as though I earned the title of Traveler. Obviously, being an American, traveling through Europe isn’t enormously bold because European and American cultures share many similarities: English is widely used throughout and the countries are highly developed. I have also lived in Europe and have a pretty strong grasp of the cultural dos, don’ts, and expectations. Europe is just not a daunting place for travel (for me; I won’t speak for everyone or belittle anyone who may be anxious about traveling to Spain, Greece, Austria, etc.).

Traveling to Asia, however, does feel daunting. There are cultures vastly different from anything I’ve ever experienced. Most of the languages and alphabets are well out of my grasp (I’ve been in Bali for ten days and all I can say in Bahasa is cat, not yet, and the slang term for a white person), and everything is just a little more chaotic and a little bit less obvious than what I’ve known for the past twenty-nine years. I’m also a full twelve hours ahead of my friends/family in the States whereas before I’d only been five or six hours ahead.

Despite all this, the whole time I’ve been in Bali I’ve thought, This isn’t so hard. I can do this; I’m adaptable. I can cross the street, I have a phone plan–I am a totally capable and confident solo traveler. The fact that I was being led by my sister, a Bali local, did not escape my notice and I knew a good bit of my confidence came from her, but still I felt that I was succeeding on the Traveler path I’d always wanted to follow.

And then I found myself needing to spend a whole day without my sister (with the possibility of multiple days). I won’t go into details, but a family emergency came up and I felt I needed to make myself scarce in order to make everyone’s lives a little bit easier.

Until the reality of being totally independent in Bali cropped up, I hadn’t realized just how much I had been relying on my sister. Yes, she speaks the language and drives and knows where to go, but this is also her turf. Traveling around Bali with her is like someone traveling around Chicago with me–very little will go wrong because I know the city inside and out. Being with my sister (except for a panicky night fueled by intense jet lag and not having slept for 20+ hours) nervousness rarely entered my mind. Without my sister, however, I could actually feel my hands start to shake. Suddenly I had to figure out where I wanted to go and what I wanted to do. I would then be there by myself, figuring things out by myself. I knew I could play it safe and just write at a Starbucks near her house, but what fun would that be? Is that what a traveler would do or a tourist would do? I wanted to go to Seminyak, a town about an hour’s drive with traffic from my sister’s place, but I’d have to get there solo and then find my way back solo. And what would I even do in Seminyak? Go to a restaurant by myself? Try to awkwardly ask directions by myself?

There are multiple layers of pathetic going on here. The first is that yes, I can go to restaurants by myself and get around by myself. I do it all the time in the States. But suddenly I’m in a foreign country and it’s like I’ve never spent a day alone in my life? What? Also: I am not completely alone and helpless. I’m acting as though I’ve been dropped in the middle of the Congo with a spork and told to fend for myself. I’m in Bali, an island so rife with travelers that all I have to do is look up from my laptop and I’ll see a fellow foreigner (there’s a guy next to me right now wearing a Billabong t-shirt). I have a SIM card and therefore access to Google Maps and GoJek (sort of like an Indonesian Uber). I am in a functioning country with electricity and WiFi and cars and people and I need to calm the hell down.

I’m worried that I’m not the adventurous traveler I’ve always claimed to be. At least, not when it comes to solo travel. Not even thirty years old, I’ve traveled a lot, but almost always with someone. The few times I’ve traveled solo have been in the U.S. and it was only for a night or two. With another person in tow I’m brave. By myself, I’m just the tiniest bit petrified. Maybe I’m a traveler when I’m with someone, but a tourist when solo.

I also want to add that it doesn’t help that I wasn’t supposed to be doing this alone. For a full year I was led to believe that my boyfriend was going to go on this journey with me. Then it turned out he was lying the whole time and pulled the rug out from under me on the night of my graduate school graduation and was like jk I never wanted to go to Asia with you or ever so bye. I wish I didn’t, but I often think about what it would be like had he come with me. I think we would have had a great time, and I know I would feel much more confident. Having a travel buddy is always nice, and it’s especially great if it’s someone you feel connected to. Then again, if my ex magically showed up in Bali I would probably just run him over with a motorbike, so I’d be traveling solo no matter what at this point.

I don’t know if I’m a real traveler or not. Right now I certainly don’t feel like one. Travelers always seem confident and flexible and able to move about without any solid plans. I don’t have a plan other than “be in Asia” and quite frankly it’s terrifying. Exciting, but also terrifying. Or maybe that’s part of being a traveler? Being scared, but doing it anyways? Having a general plan, but not a definite itinerary (I do love a good itinerary)? I don’t think I’m a tourist. Tourists usually have plans (and plane tickets out of the country, which I do not have and it’s fine I’m not worried about it YOU’RE WORRIED ABOUT IT AND I AM TOTALLY NOT PANICKING.)

Perhaps I’m a traveler in training. A traveler pending? Pending traveler? What does make a traveler? Mindset? Extended stays? Traveling light? “Roughing it”? Dictionary.com defines traveler as “a person who is traveling or who often travels,” and tourist as “a person who is traveling or visiting a place for pleasure.” (This is also not a judgement on which is better: traveler or tourist. I think both are great and it depends on which makes you the happiest. At least you’re traveling!) I’m traveling for pleasure, but it’s not exactly the let me lounge on this beach chair and sip gin and tonics without a care in the world kind of pleasure. It’s more of a this is terrifying what the hell have you gotten yourself into, but one day you will be glad you did this kind of pleasure. An anticipated pleasure.

Have thoughts on what makes a traveler vs a tourist? Leave a comment below! 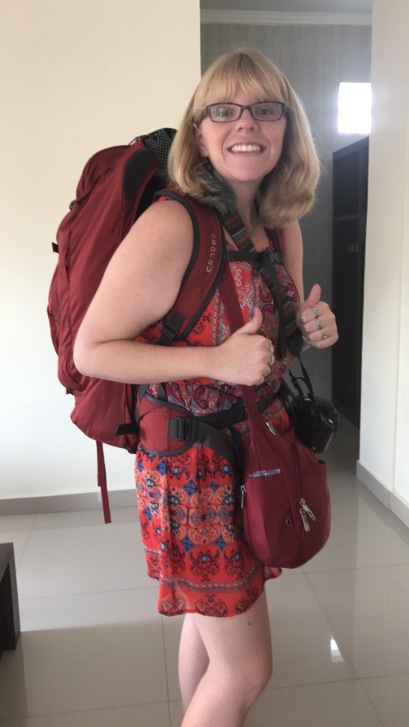