I keep going back and forth with this post. On the one hand I’m like: “It’s been one year since your life collapsed. Look how far you’ve come! Write about it!” Then I start writing and I think: “Goddamn why are you still SO SAD?” Then I cocoon myself in between blankets and pillows, put on my dad’s dogtag, and watch comedy shows on Netflix.

On May 5th I got a tattoo of a semicolon. It both represents that I’m a writing nerd and signifies the partial end of one sentence (life) and the beginning of another, but without a full stop period. The tattoo only took five minutes to get (roughly the length of one Coldplay song), but I’d been thinking about it for a while. I chose May 5th because that was the one year anniversary of my life falling apart.

On the night of May 4, 2017 I lay in my living room on an air-mattress-turned-couch. I’d sold most of my furniture in preparation for a move, and my apartment was half in and out of boxes. I watched the “Casino Night” episode of The Office. The next evening I would graduate from my three-year Master’s program. I tried not to think about how my dad would not be at the ceremony because he’d died unexpectedly ten months previous.

Just as Jim and Pam kissed for the first time ever my boyfriend, R, called. “I have some bad news,” he said. I thought he was going to say he couldn’t make it to my graduation because of a business trip. Instead he dumped me. Typical engineer, it was quick, methodical, and so cold I could almost imagine him holding a crumbled To Do list in his hands with “break Georgia’s heart” as the last item not crossed off. He said he’d been thinking about ending things for months, but didn’t know how to tell me. Apparently over the phone at 11:30 p.m. the night before my graduation was the ideal moment.

And that was that. My seven year relationship (nearly thirteen if you include the six years we were best friends) ended without any sort of warning and without me having a say in the matter. It was like experiencing my dad’s death all over again.

To be totally honest: this broke me. I had just barely been keeping myself upright after my dad’s death. My counselor told me to lean on people in my grief, and I did. I leaned on R the hardest. When that leg of my wobbly chair was also kicked out from under me, I  gave up. Grief is exhausting. A double douse of grief? Unfathomable. I spent the next several months telling my counselor “I’m not going to survive this.”

Four months after R said he had “some bad news” I moved to Asia. I didn’t go for the cliche Eat, Pray, Love experience. Sure, having a handsome Brazilian lover would be great, but I didn’t look at Thailand as starting over or building a new life. I’d wanted to move to Asia ever since graduating from undergrad. R and I had planned to move to Asia together, but it turned out he never really intended to go. I decided to continue with the move because I didn’t know what else to do.

I don’t know what I expected from Thailand. I knew I wasn’t going to move here and immediately be happy, but I thought I’d at least gain some feeling of accomplishment or pride. Instead, when 10:30 a.m. May 5th, 2018 (May 4th 11:30 p.m. EST) rolled around—exactly one year since the Bad News Phone Call—I felt…nothing. I rode a BTS train to work. I looked at my phone when it hit 10:30 a.m., sent a few friends a happy one year anniversary of my life imploding! text, and went to work. That evening I got the semicolon tattoo, and then I headed to meet a friend at a rooftop bar.

On the way to the rooftop bar I thought about what had changed in the past year. Sure, I’d moved to a new country, started a new job, and made new friends, but given my history that didn’t feel that spectacular. It just felt like my usual transient life. My personality had changed a bit: I’m a bit more upfront about my feelings and less likely to tolerate bullshit, whereas I used to bend over backwards and forwards to do anything for anyone even if I didn’t particularly like them. I’m a lot calmer and more apt to let things roll off my back because, let’s face it, I’ve seen how awful life can be so everything else pales in comparison. I’m also a bit more likely to just drop and leave anything/anyone that even slightly upsets me, which is a boon and a curse.

I was at the rooftop bar for an hour when suddenly an older man beside me collapsed. I was standing at the bar, waiting to order a drink, when the bartender gasped and shouted in Thai. A bald man stood beside me and he turned just in time to catch the older man, who grasped at the lip of the bar. The bartender, bar manager, and house manager all ran to the man. Everyone cleared as much space on the crowded floor as possible. I bolted to the opposite side of the room. I tried to catch my breath while my friend asked what had happened.

I wasn’t at home when my dad collapsed. While my mum and I were at the hospital, our neighbors called someone to clean the house before we returned home. I have never seen any physical evidence of what happened to my dad. To me, Dad was there one moment and then he was gone without a trace. All I can do instead is replay over and over what I think happened. Seeing the man collapse at the bar was like seeing my morbid imaginings come to life.

Thankfully, the man was okay. He walked out of the bar with the help of the house manager. I spent the next hour halfheartedly flirting with a Brazilian guy (maybe there is an inkling of Eat, Pray, Love after all) to distract myself. I wanted to curl onto the ground and cry. 365 days, a move halfway across the world, and yet it felt like nothing had changed. One small reminder of my dad still brought my energy to a grinding halt for days or weeks. If a date went well I took steps to push the guy away because it’s hard not to believe that every relationship will end in crushing heartbreak just like the last one.

Before you close your browser window and think, “Oh my god this girl is too sad and beyond hope,” I promise this will end on a slightly more uplifting note (because it can’t get much sadder, amiright?).

I left the rooftop bar and went to a friend’s apartment. On the way there I called another friend. Both of them let me cry and rage and babble and just generally fall apart and, with their help, put myself back together again. In all honesty, my friends didn’t even have to do anything. They just listened and showed me that they were there for me.

Days after the tattoo, the one year implosion anniversary, and the man collapsing, I realized that there’s been another change I hadn’t fully acknowledged: my trust in friends. I’ve always made friends easily, but it takes me a while to make good friends. I tend to keep people at arm’s length and tell myself if this person suddenly leaves, that won’t bother me because we were never that close anyways. I chalk this up to my transient impulse and how I tend to just up and move and leave whatever community I’ve established. After losing my dad and R, friends seemed to come out of no where to lend their support. They flew or drove from states away to be with me; they planned weekend trips to keep me company; they fed me; they gave me Mr. Darcy dolls and break-up playlists; they sent words of encouragement, helped me move, let me crash in their apartments, and let me call day or night to talk about anything. People I hadn’t talked to in years reached out. Even people I’ve only known for a short time in Bangkok have been immensely caring and helpful.

I’ve always known I had awesome friends (and coworkers!). I just didn’t know how many I had until this year. Obviously I wish I could have figured it out a lot sooner and through a different avenue, but it’s heartwarming to know that even when life seems to be collapsing like a massive sinkhole, I have so many amazing people to help pull me back up.

Just a small sampling of these kickass people. 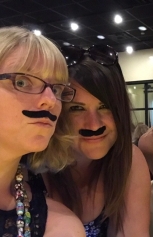 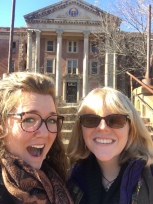 This amazing bestie flew from states away just to help me load, unload, and drive this best over 300 miles. 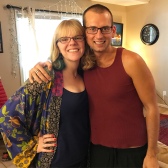 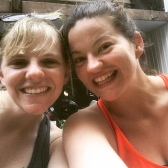 So cheers to all of you wonderful people! You’ve helped make this past year a little bit more bearable.

Oh god, was that cheesy? That was cheesy. Here’s a gif to make us all feel a little less awkward: